Food and Garden Dailies started as a way to record my family's favorite recipes. It has come in handy many times when I'm asked for a recipe. I simply email a link to the blog! But I couldn't just stick to recipes. The kitchen is tied to the garden in so many ways...and so I let you into my ever changing garden as well. 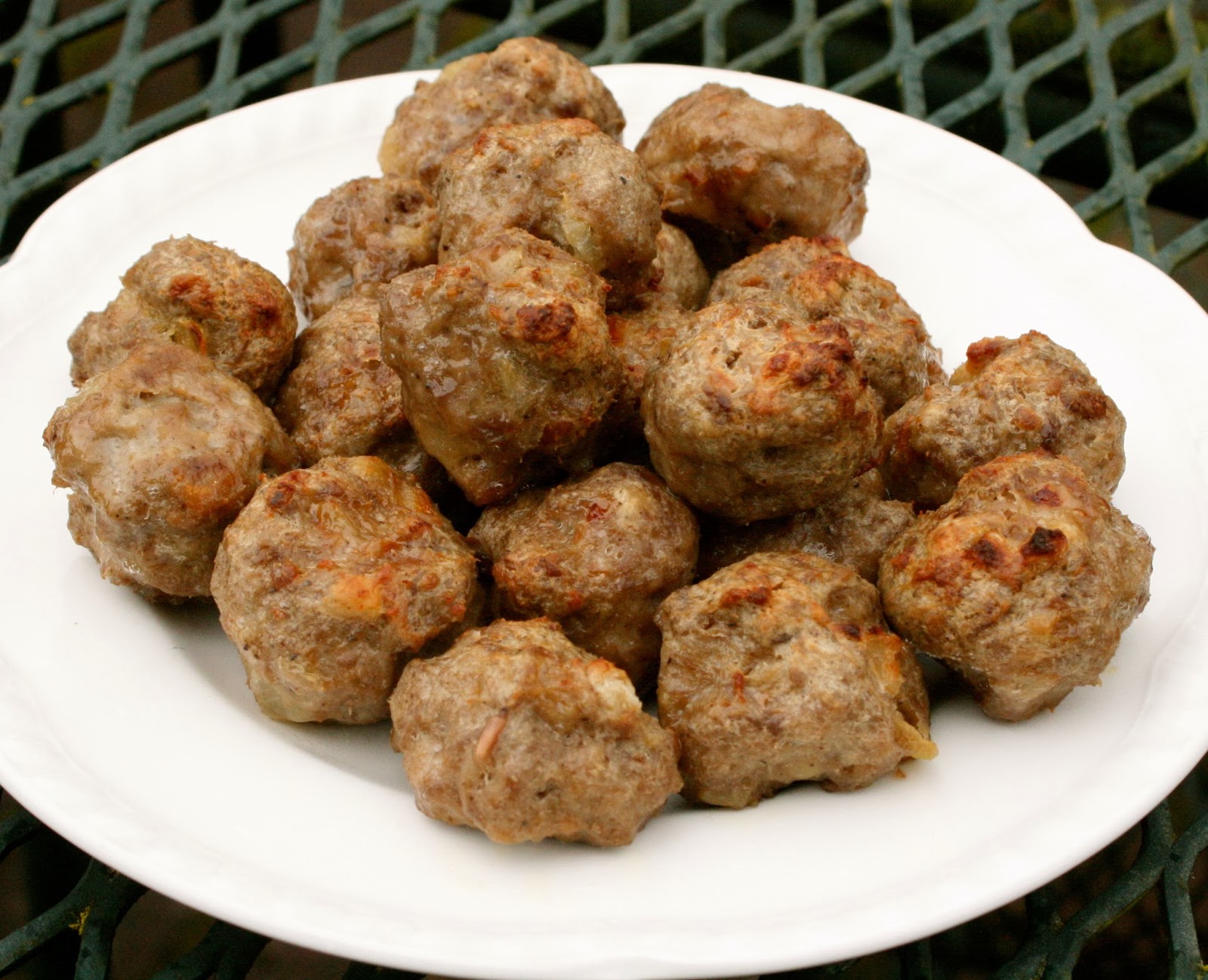 I blame Pinterest.  For all the fabulous recipes I've tried in the last 18 months and haven't shared.  Yes, I blame Pinterest.  You see, it's so easy to just press "Pin It" and share it.  But what happens if the blog (because they mostly come from blogs) disappears?  What if Pinterest goes kaput?  I have found so many great (and some not-so-great) recipes on Pinterest.  I need to make an effort to save them all to my hard drive or print them out for safe keeping.  I need to take the time to share them on my blog.  Because there are a few recipes I'd hate to lose.  This is one of them.

I originally found this recipe from Cooking With Mel.  I've been making it for at least a year now, and found that while I really don't like the gravy (too bland...but that's kind of how it's supposed to be), I LOVE the meatballs.  They have been my go-to meatball to use with all sorts of sauces.  In fact they are incredible to eat as a stand-alone plain meatball.  If you bake a pan of these and leave them out, they will be gone.  Gone.

But each time I eat them, I curse myself for not adding a little salt and a bit more onion.    Because while they're darn good, they could be better.

Recently I was reading through the recipe and realized it was slightly adapted from this Alton Brown recipe.  Hmmmm...guess what?  His recipe uses 25% less beef/pork to the  same amount of onions and spices.  He also adds nutmeg, which Mel omitted.  And he uses salt in the mixture.  I knew I was onto something!

So this week as I made about 10 batches of the meatballs (I told you I love them!  They freeze well too!), I tweaked each batch a bit to see what I liked best.  And I found that I preferred a little nutmeg, but not as much as Alton.  Same with the salt...I liked a little bit, but found a whole teaspoon was too salty.  Using Alton's ratio of meat:seasonings created a more tender meatball.   So after all my testing and tweaking, here is my version of Swedish Meatballs.

And I'll even include the gravy recipe, though I don't care for it.  I would like a bit more pep, more flavor.  It's a very bland gravy.  But in my Swedish Meatball research, I learned that this is not supposed to be a spiced up gravy.  It's made in the traditional Swedish style.  I have made it and added a bit of ground marjoram, thyme, and a kick of Tony Chachere's Creole Seasoning.  I just kept adding a little of this and that until I liked it.

Place in a mixing bowl (I use my KitchenAid*):
2 pieces of torn bread (I've used all kinds, even sourdough)

Let the bread/milk stand while you prepare the onions.

Sautee until the onions are soft.  Set aside.

At this point I like to mix it up a bit so that all the seasonings will mix evenly into the meat mixture.

Mix well.  Form the mixture into 1" balls.   Roll them with your hands instead of using a cookie scoop...you'll get a better shaped meatball.

To cook them you have a few options.  I use the oven, because it's easier and faster.  And they taste great this way.  Alton Brown puts butter in a frying pan, then adds the meatballs.  That must be amazing.  But I'm usually making so many that I just don't have the time to fry up smaller batches. If I were going to make the gravy, I'd go the frying route so I'd have some pan juices to whisk into the gravy.

Pre-heat the oven to 400 degrees F.   Place your meatballs in a jelly-roll pan (cookie sheet with a bit of a lip).  They can be close together, but shouldn't touch.  Cook for 14 minutes.


Heat 2 TB clarified butter in the saute pan over medium-low heat, or in an electric skillet set to 250 degrees F. Add the meatballs and saute until golden brown on all sides, about 7 to 10 minutes. Remove the meatballs to an ovenproof dish using a slotted spoon and place in the warmed oven.

Once all of the meatballs are cooked, decrease the heat to low and add 1/4 C all-purpose flour to the pan or skillet. Whisk until lightly browned, approximately 1 to 2 minutes. Gradually add 3 C beef stock and whisk until sauce begins to thicken. Add 1/4 C heavy cream and continue to cook until the gravy reaches the desired consistency. Remove the meatballs from the oven, cover with the gravy and serve. 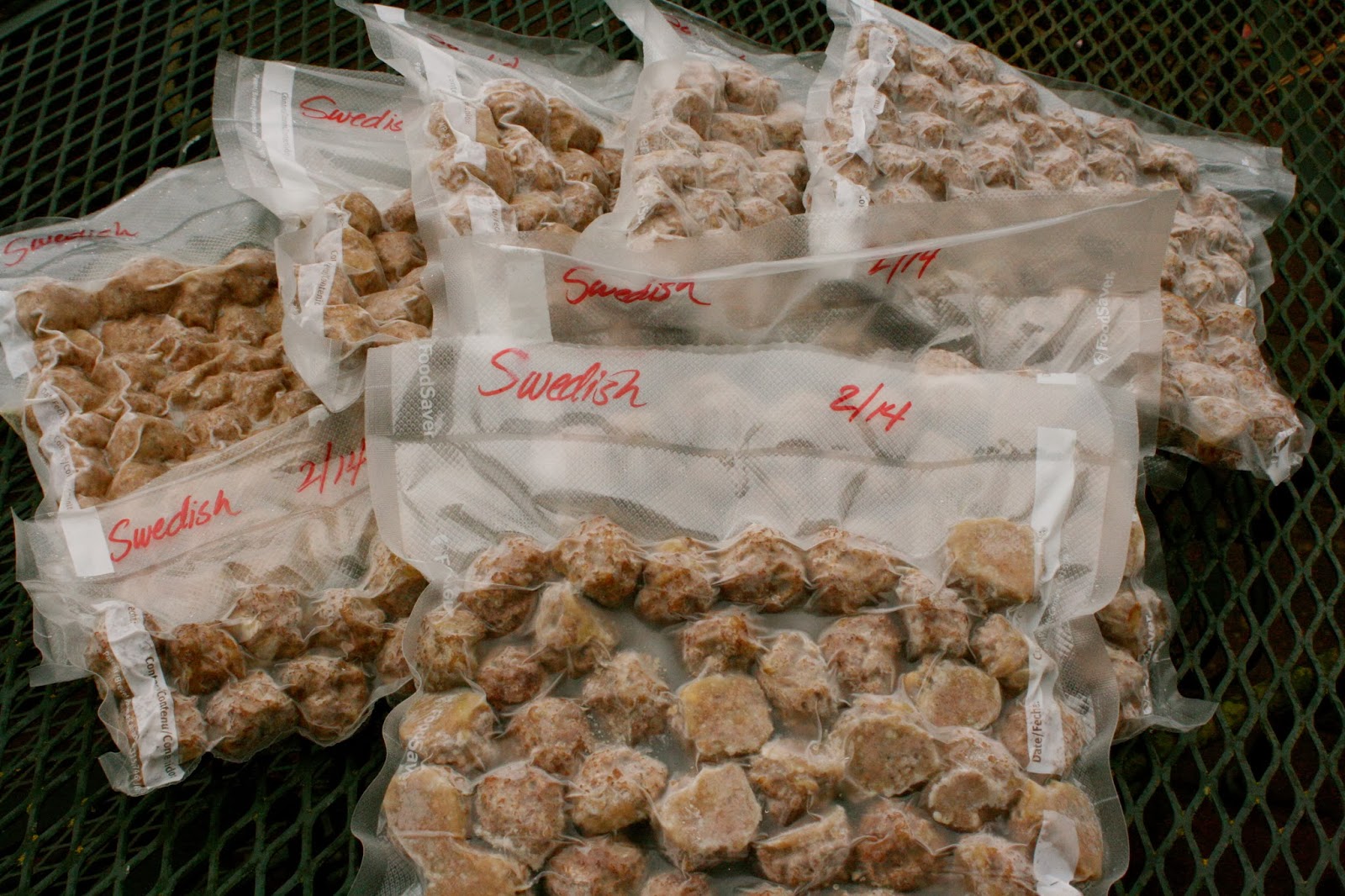 FREEZING
The meatballs freeze well. Let the meatballs cool, and then place them on a baking sheet.  Flash-freeze and vacuum pack for best result.

*In my 5 qt. KitchenAid  Artisan mixer I can easily make a double batch of these.

**Save the egg whites!  They can be frozen and used later.  Have you ever made a home-made angel food cake?  They are to-die-for!!  And soooo easy!  That will be tomorrow's project.

this was a such very nice blog and providing to much information on this blog.chowringhee satya niketan

10 Most Popular Posts of All-Time